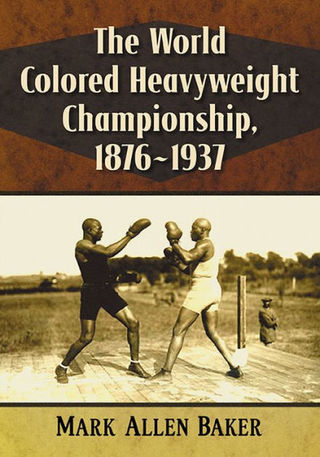 For six decades the World Colored Heavyweight Championship was a useful tool of racial oppression--the existence of the title far more important to the white public than its succession of champions. It took some extraordinary individuals, most notably Jack Johnson, to challenge "the color line" in the ring, although the title and the black fighters who contended for it continued until the reign of Joe Louis a generation later. This history traces the advent and demise of the Championship, the stories of the incredible professional athletes who won it, and the demarcation of the color line both in and out of the ring.

"Mark Allen Baker has that rare knack of sending the readers back in a Wellsian Time Machine into the musty arenas of yesteryear to bear witness to soul-string pugilistic battles. We felt as if we were ringside when Sam Langford and Harry Wills were ripping into one another in their torrid fistic counters together… "

"Rich in historical insight, thoroughly researched, and enhanced by many photographs, Baker's extraordinary The World Colored Heavyweight Championship, 1876-1937, is a book to read, savor and discuss. It's a book dealing with a crucial time in boxing and simultaneously is a lesson in American history."

"In the past, Baker has written such wonderful boxing books: Battling Nelson – The Durable Dane, The Fighting Times of Abe Attell, and Between the Ropes at Madison Square Garden.  His recent treatise, The World Colored Heavyweight Championship, 1876-1937, just may be his best…  Baker takes no prisoners in his indictment of the white Heavyweight Champions who used the "Color Line" to cover up their own racist ideals, or just plain cowardice… Author Baker made a telling remark in the book, when he stated that "Living a dream with no opening bell was never fun."

Biography: Lou Ambers: A Biography of the World Lightweight Champion and Hall of Famer