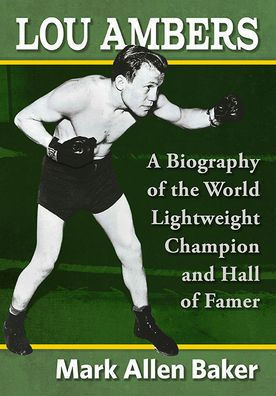 Born Luigi d'Ambrosio, Lou Ambers grew up in Herkimer, New York, during the Great Depression. He and his nine siblings watched their father lose his business. Then they lost their father. Taking to the ring as a "bootleg" boxer to support his family, "The Herkimer Hurricane" soon became an undefeated contender, losing only one of more than fifty fights in his first three years as a professional. A keen judge of distance with prodigious hand speed, he worked just within punching range, busily slipping and feinting, then slashing in with hooks and uppercuts.

In 1936, he faced his idol and mentor, Tony Canzoneri, and defeated him to capture the world lightweight championship. Ambers held the title for twenty-three months, losing it in an historic fight with the formidable Henry Armstron(1938) but regaining it in a rematch the following year. As the 1930s ended, so did Amber's impressive career. This book chronicles the life of one of the great 20th century lightweights.

"Baker is at his best describing the action of Lou's most significant fights, as is the case with Ambers' title-winning bout against (Tony) Canzoneri, September 3, 1936." –– Ringside Seat, Summer 2021

"Mr. Baker has that knack for detail where he places his readers into a portal through time and deposits them ringside for memorable battles. He also makes a reader feel that they are also in a smaller smoke-filled arena watching Ambers fight local boxers, journeymen, club fighters and hungry contenders. It is a fascinating journey the author takes one through." - The USA Boxing News, September 28, 2021

"Mr. Baker through his relentless and extensive research has established for the reader a direct pulse into the boxing landscape that prevailed in that long ago period." - The USA Boxing News, September 28, 2021

"We loved this book and walked away with a new found respect and awe for Lou Ambers." - The USA Boxing News, September 28, 2021