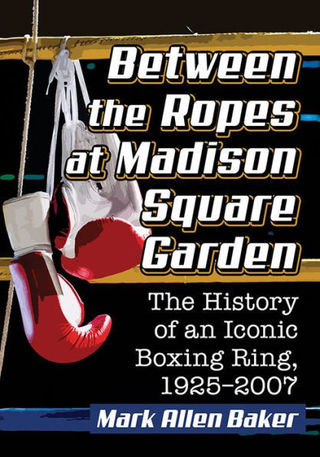 Click on the link below to purchase the book

Inside Madison Square Garden, the City Ring was the altar of pugilism from 1925 until 2007. Hosting countless championship fights, historic main events and memorable undercards, it was center stage of boxing history.

The ring now rests at the International Boxing Hall of Fame in Canastota, New York--its 132 assembled pieces memorializing a key facet of 20th century American life. While many books have been written about great fistic contests that took place at Madison Square Garden, this is the first to focus on its Holy Grail.

"Baker is a tireless, exhaustive researcher, and his recreation of the grand opening of the second Garden , both vivid and evocative, is testament to this. Within a few paragraphs he deftly, often beautifully captures the essence of fighter careers and classic contests and rivalries which graced the “City Ring”. Particularly memorable is his biographical sketch of Sidney Walker, a.k.a, “Beau Jack”, one of the most popular fighters in the history of the City Ring who headlined twenty-one bouts at the Mecca of Boxing, a record which stands to this day."